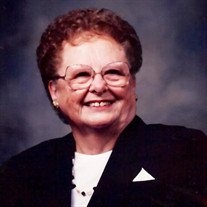 Margaret Emily Madison Frank, age 96, of Sparland, died January 28 at 11:16 AM at her home. She was born in LaPrairie Township, Marshall County, on June 10, 1920 to the late William and Anna Burnett Madison. Margaret attended Smith County School, Sparland High School and at time of her death she was the oldest alumni, class of 1937. She also graduated from Monmouth College, and Illinois State Teachers College in Normal Illinois.

She taught at the Turnbull County School for four years. During World War II she was "Margaret The Riveter", riveting airplane wings at the Rock Island John Deere plant. Margaret married Thomas William Frank on December 24, 1942.Tom passed away on January 29, 2012.

Margaret and Tom opened Frank's Hardware in 1951. She served as book keeper, secretary, and clerk. Margaret also worked for 25 years as clerk at the Marshall Putnam County fair. She was a fifth generation lifelong member of the LaPrairie United Presbyterian Church and its oldest member, having served in many offices.

The best things in Margaret's life were being a wife, mother, grandmother, and great grandmother. She and her husband Tom liked raising Shetland ponies, Angus cattle, and loved country music. Margaret was very proud of her church family and the 160 year legacy the Burnett, Madison, and Frank families brought to the LaPrairie and Sparland communities.

She was also preceded in death by brother James Madison and her foster brother Robert Sanders.

To send flowers to the family or plant a tree in memory of Margaret Frank, please visit our floral store.

Please click here to view the video tribute
To send flowers to the family in memory of Margaret Frank, please visit our flower store.