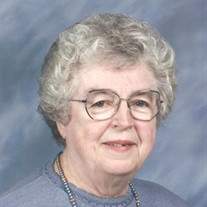 
Roanoke- Margaret Anne Ehrnthaller, 87, of Roanoke, IL, passed
away at 9:55 am on Friday December 20, 2013 at the Apostolic
Christian Home of Roanoke.


She was preceded in death by her husband Raymond "Bud", her
parents, one son, Jim Ehrnthaller; and three brothers, James Robert
Burch, Bernard Burch, and Roger Burch.


She graduated from Manual High School in 1944 and had worked in
the office at Mervhant's Warehouse in Peoria.


Margaret was a loving mother who loved her family very much.
She was especially known for her famous apple dumplings.


Funeral services will be held at 10:00 am on Monday December 23 at
St. Joseph Catholic Church.  Fr. Neri Greskoviak will
officiate.  Visitation will be held from 1-3:45 pm on Sunday
December 22 at Knapp-Johnson-Harris Funeral Home in Roanoke with a
rosary service at 3:45. Burial will be in St. Ann's Cemetery in
Toluca.


Memorial Contributions may be made to Apostolic Christian Home of
Roanoke or to the American Heart Association. Online condolences
may be sent to the family at www.knappjohnsonharris.com.

To send flowers to the family or plant a tree in memory of Margaret Ehrnthaller, please visit our floral store.

To send flowers to the family in memory of Margaret Ehrnthaller, please visit our flower store.