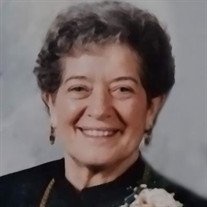 Marian Marie (Burns) Koch was born at home in Princeville, IL on January 28th, 1921 a daughter of Irene (Hayes) and Charles Burns. She was the fifth of their nine children. She attended both Princeville Elementary and High School, the first in her family to graduate. A child of the Great Depression, she worked hard her entire life. She helped her mother at home with the younger children and also helped her start up and run a family business in Princeville selling cream, eggs, animal feed and baby chicks. She also worked in a canning factory there. She moved to Lacon in March of 1942, shortly after the tornado. She held many jobs in Lacon over the years including the Woolen Mill, a sweet shop, Breen's grocery store, Gamble's, cleaning various houses, Piper's Drugstore, Parson's Men's Store and lastly retiring from Hoppler's Jewelry Store after 17 years. She met the love of her life, Gale B. Koch at a restaurant in Lacon. It was love at first sight and a whirlwind romance. They eloped to St. Louis and were married on Valentine's Day 1943. Returning to Lacon afterward, the happy couple lived with his parents in Lacon until he was sent to Ft. Dix, NJ to the Army Air Force base there. When he was deployed overseas for WWII, she moved back to Lacon for a short time. She and a friend decided to move to Palm Springs, CA to try and get a "Rosie the Riveter" type job, but when they got there, the jobs were all taken. They found employment at a hotel, where she had the pleasure of meeting many celebrities of the day. After WWII, she and her friend hitchhiked to Hollywood for the VJ Day celebrations. She returned to Lacon to start up house with her husband. She loved big band music and took every chance she had to dance to it, sometimes until 3 in the morning. She attended the opening night of The Hub Ballroom, and was there when they closed the doors for the last time, and countless dances with the Big Band Leaders in between. They were blessed with two children; Stephen Gale in 1947 and Patricia Lynn in 1952. They moved into their residence at 509 South St. in 1953 and she lived there for 62 years. During her long life in Lacon, she was involved in many organizations including the Lacon Library board, 50 plus year member of the Order of the Eastern Star in which she was a Past Worthy Matron, Home Extension, a member of the Lacon-Sparland Methodist Church and the Methodist Doves, the American Heart & Lung Foundation, the American Cancer Society, served on the Marshall County Election Board as a judge, the American Legion Auxiliary, was a Gold Star Sister, Historical Society Member, and volunteered for various other groups. She was proud to be a blood donor at many blood drives. Traveling was one of her passions. She visited almost every state in the union including Hawaii and Washington D.C. and many foreign destinations like Mexico, Germany, Canada, Austria, and Switzerland. Her last vacation was to New York City with her granddaughter Amy in December of 2008. Family came first to Marian. She was a loving wife, mother of Patricia and Stephen, grandmother of Richard (Christy), Eric, and Jason (Holly) Koch, and Jennifer (James Sr,), Amy and Sean Ross, great-grandmother to James Morgan Jr, Jacob and Lauren Koch, and Jayden Koch, and great-godmother to Emily, Erin and Matthew Williams. She loved to attend her grandchildrens' and great-grandchildrens' sports and school functions. She never missed a chance for a hug and kiss and to put her cold nose in their necks. She had a great sense of humor and loved to retell family stories such as the log that was really an alligator and the great Missouri rubber lobster incident. She loved to laugh and her laughter was infectious. She was a fantastic cook, always baking something wonderful. She loved to have her grandchildren help her in her little kitchen. She loved all animals and had many pets throughout the years. With her daughter's help, she lived in her own home until December of 2014, when she took up residence at St. Joseph's Nursing Home in Lacon. Her family is forever grateful for the care she received there. Her life's journey ended at Proctor Hospital in Peoria, IL on Wednesday, September 30th, 2015 at 11:20 pm. She eased from this life with her daughter Patricia holding her hand. Oh, to be able to have witnessed the gigantic reunion on the Golden Shore! She was preceded in death by her parents, her husband of 50 years, all her four brothers, four sisters, brother and sister in-laws, several nieces and nephews, her grandson Eric and many beloved pets and friends. Cremation has been accorded. Memorial services will be held at the Lacon-Sparland Methodist Church on Friday, October 9th. The visitation will start at 10 am, with the funeral following at 11 am. Burial will be in the Lacon cemetery. There will be a luncheon directly afterward at the Methodist Church. Memorials can be made to the St. Joseph's Nursing Home activity fund, Lacon-Sparland Fire Dept. and the A.R.K. Online condolences may be sent to the family at www.lenzmemorialhome.com.

To send flowers to the family or plant a tree in memory of Marian Marie Koch, please visit our floral store.

To send flowers to the family in memory of Marian Koch, please visit our flower store.