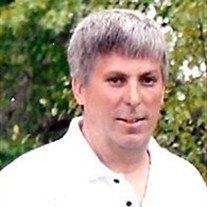 
He was preceded in death by his grandparents and one
niece, Lindey Hornstein.


Mark graduated from Chatsworth High School and Joliet
Jr. College with an Associate Degree in Ag Business and was
currently the co-owner/operator of Chatsworth Ag Services.


He was an avid sports fan and enjoyed playing golf at
the El Paso Country Club and Pontiac Elks.  He was a member of
the El Paso-Gridley Athletic Booster Club where he served on the
board of directors from 2005-2012.   He also served as a
scorekeeper for away games for the boy's basketball
team.


Funeral services will be held at 10:30 AM on
Saturday, February 22, 2014 at the Trinity Lutheran Church in El
Paso.  Rev. Jonathan Boehne will officiate. Visitation will be
held on Friday evening from 3-8 pm at the Ruestman-Harris Funeral
Home in El Paso.  Burial will be in Evergreen
Cemetery.


Memorials may be made to the Illinois Cancer Center
of Peoria, IL or the El Paso-Gridley Athletic Booster Club.


Online condolences may be directed to his family at
www.ruestmanharrisfuneralhome.com.

To send flowers to the family or plant a tree in memory of Mark E. Kessinger, please visit our floral store.

To send flowers to the family in memory of Mark E. Kessinger, please visit our flower store.