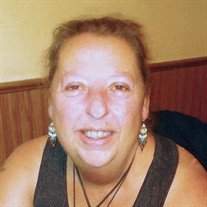 Marla Jean Rupp, 61, of Lacon, formerly of Chillicothe, died on April 30, 2020, at her residence. Marla was born in Peoria on October 29, 1958 to Jack and Lola (Mathis) Blankenship. She married William Rupp, Jr. on June 8, 1996, in Rome, Ill. William preceded her in death in 2012.
Marla is survived by her mother, Lola Blankenship of Chillicothe; her children, Brandi (Adam Herrell) Adams of Eddyville, Ky., Waylon (Beth) Rupp of Peoria, Jobe (Nicole) Rupp of Sparland; siblings Terry (Linda) Blankenship of Peoria, Charlie Blankenship of Canada, Marcella (Terry) Galletti of Sparland, Paula (Larry) Gilmore of Peoria, Alan (Becky) Blankenship of Yates City, Jeff (Hong) Blankenship of Chillicothe; her significant other Wayne Galpin; and 15 grandchildren and five step-grandchildren. She was also preceded in death by her father Jack, daughter Billie Jean Rupp, and grandson Justin Rupp.
Cremation rights have been accorded and a celebration of life will be held at a later date. Online condolences can be left at lenzmemorialhome.com

To send flowers to the family or plant a tree in memory of Marla Jean Rupp, please visit our floral store.

To send flowers to the family in memory of Marla Rupp, please visit our flower store.