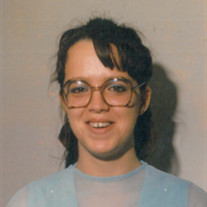 Bloomington - Mary L. Henson, 52 of
Bloomington, passed away at 2:05 a.m. on Saturday, March 29, 2014
at Bloomington Rehabilitation and Health Care Center in
Bloomington.

Cremation rites have been accorded,
services will be held at a later date.

Memorials may be made to The
American Diabetes Association or The American Cancer Society.
Kibler-Brady-Ruestman Memorial Home in Bloomington is assisting the
family with arrangements.

Mary was born on June 1, 1961 in
Bloomington, a daughter of Cecil and Theresa Price Henson,
Sr.

She was preceded in death by her
mother, Theresa; a sister, Pam Henson and her maternal and
fraternal grandparents.

She was a loving mother,
grandmother, sister and daughter.  She enjoyed spending time
with her grandchildren and family.  She was a loving and fun
person to hang out with.

To send flowers to the family or plant a tree in memory of Mary L. Henson, please visit our floral store.

To send flowers to the family in memory of Mary L. Henson, please visit our flower store.