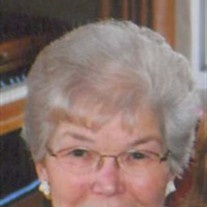 Normal - Mary Lou Sorokowski, 81,
of Normal, passed away at 3:20 p.m. Monday, January 21, 2013 at
Heritage Health Care in Normal. A Celebration of Life will be at 11
a.m. Friday, January 25, 2013 at Eastview Christian Church in
Bloomington with Rev. Mark Warren officiating. Family will receive
friends one hour before the services at the church on Friday. In
lieu of flowers, memorials may be made to the Eastview Christian
Church. Kibler-Brady-Ruestman Memorial Home in Bloomington is
assisting the family with arrangements.

She was preceded in death by her
parents, husband and two brothers.

Mary Lou was actively involved in
her church and enjoyed gardening and spending time with her
grandchildren.

Online condolences can be made to
the family at kiblerbradyruestman.com

To send flowers to the family or plant a tree in memory of Mary Lou Sorokowski, please visit our floral store.

To send flowers to the family in memory of Mary Lou Sorokowski, please visit our flower store.