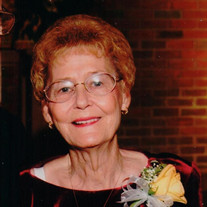 Mary A. Parrish, formerly Hulse, 86, of Peoria, Peoria Heights and Lacon died on February 11, 2021 at OSF Saint Francis in Peoria. Born in Pine Bluff, Ark. on April 23, 1934 to the late Ben and Willa Mae (Stout) Ellison, she married Bennie "Geno" Hulse on December 29, 1949. They moved to Peoria and for many years operated Hulse's Fresh Vegetables and Lawn Ornaments, with the home site on Galena road and farmers markets at Sears and later at the Metro Center. She also worked at Caterpillar for nearly 10 years before Bennie died in 1986.
Mary then found her soul mate Page Parrish Jr. and married June 9, 1990 in Lacon, where she fell in love with the town and its people. She operated Mary's Crochet Shop in Lacon for over 10 years at Nans Tans. Mary and Page loved country music and dancing. They were deeply involved as members of the American Legion Post 983 in East Peoria. Page died November 3, 2010 and Mary moved back to Peoria Height's in 2015 to be closer to her children and grandchildren.
Mary enjoyed cooking, crocheting, working in her yard and growing beautiful flowers. Her biggest joy was spending time with her family, grandchildren and her four cats who were the love of her life. Mary had a love for Christmas and the holiday season which she carried year-round. Mary will be deeply missed by everyone whose life she touched.
Mary is survived by her sons Mike (Janet) Hulse of Peoria, Tony Callear of Peoria; daughter Cammi Warner of Chillicothe; stepsons Page Parrish III of Sparland, Gary Parrish of Lacon; stepdaughters Cheryl (Larry) Jeffery of Lacon, Elizabeth McKeever of Lacon; eight grandchildren; and nine great grandchildren. She was also preceded in death by her daughter Doris Jean Lewis, three brothers, and one sister.
A visitation for Mary will be held on Wednesday, February 17 from 4 to 7 PM at Lenz Memorial Home in Lacon. Cremation rites will follow and a private family burial of cremains will be held in the Chillicothe City Cemetery at a later date. Memorials can be made to the East Peoria American Legion or the ARK Animal Shelter and online condolences can be left at lenzmemorialhome.com


To send flowers to the family or plant a tree in memory of Mary A. Parrish, please visit our floral store.

To send flowers to the family in memory of Mary Parrish, please visit our flower store.