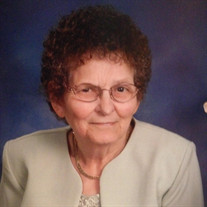 Maymie Louise Smith of Lacon, Illinois, died August 24, 2019, at Unity Point Proctor in Peoria. Born in Lawrence County, Tennessee, to the late Cecil and Mildred Bassham Williams, she married Denzil Smith on February 26, 1955, in Iuka, MS. Denzil died on May 27, 2009.
Louise took care of other people‘s children in her home. She was skilled in gardening, cooking, sewing and all the other things it took to take care of children. Her cooking was exemplary; her roast beef and pecan pie will be sorely missed.
Louise is survived by: her children Joan (Craig) Copp of Minonk, Joel (Christel) Smith of Wenona, Stan (Sandra) Smith of Elko, NV, Tim (Violet Gerardo) Smith of Lacon; sisters Juanita (Charlie) Robinson & Tess Davis both of Toluca; brother Roger (Jeanette) Williams of Lawrenceburg, TN; grandchildren Sara (Josh) Simmons of Wenona, Colt (Shea) Smith of Geneseo, Zack Murphy of Elko, NV, Chloe Smith of Lacon, and six great-grandchildren. Also by her special neighbors, Danny and Julie Rebholz. Louise was preceded in death by one brother and one sister.
Cremation rites have been accorded and a memorial service will be held on Wednesday, August 28 at Lenz Memorial Home in Lacon at 6 PM.  Visitation will be one hour prior to the service and burial will be in the Smith Cemetery in Fall River, TN, at a later date. Memorial contributions can be made to St. Jude and online condolences can be left at lenzmemorialhome.com


To send flowers to the family or plant a tree in memory of Maymie Louise Smith, please visit our floral store.

Please click here to view the video tribute
To send flowers to the family in memory of Maymie Smith, please visit our flower store.