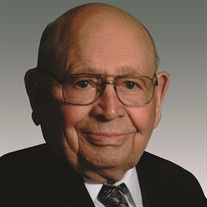 Melvin Deen Budd, 95, of Lacon, passed away at UnityPoint Methodist on June 28, 2019. Born in Clawson MI on November 28, 1923 to the late Carl and Florence Deneen Budd, he married Justine Klein on April 26, 1947 in Lacon.
Mel served his country in the Pioneer Battalion, Fourth Marine Division and Fifth Marine Amphibious Corps. He was one of the 5% that made it back from Iwo Jima alive. He received a presidential Citation for Valor, Asiatic Pacific Campaign medal with Bronze Star, the World War II Victory medal, and good conduct medal. After returning he spent 44 years on the Illinois River as a marine contractor, President and co-owner of Deneen River Company Inc. holding a U.S. Coast Guard River Pilot License. Mel was a member of the flying 20s Airplane Club where he earned his single engine air pilot license. He was a lifetime member of both the 15 Club and Lacon American Legion Post 593. He was on the Honor Flight to Washington DC on May 26, 2010. Mel enjoyed vacations on Sanibel Island and fishing in Crosslake MN.
Mel is survived by: his wife Justine, sons Melvin (Cathy) Budd Jr &John (Cheryl) Budd both of Lacon; daughters Maryanne (Gary) Anerino of Zionsville IN, Stephanie Martin of Altoona IA, & Laurie (Greg) Vincent of rural Lacon; brother Ronald (Darlene) Budd of Lincoln; Five grandchildren, 11 Great grandchildren, two step grandchildren, and nine step great grandchildren. He was preceded in death by his brothers Vernon and Jay Budd.
Cremation rights have been accorded and a Mass will be held on Monday, July 1 at 11 AM at the Immaculate Conception Church of Lacon. Visitation will be held one hour prior to service at the church. Burial will be at a later date and memorials can be made to the Peoria Honor Flight. Online condolences can be left at lenzmemorialhome.com

To send flowers to the family or plant a tree in memory of Melvin Deen Budd, please visit our floral store.

To send flowers to the family in memory of Melvin Budd, please visit our flower store.