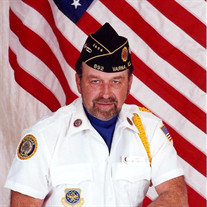 Mel joined the Air Force in 1962. He served in the 28th Air Transport Squadron and 1501st Air Transport Wing at Hill AF Base in Utah. Mel then became a lineman for CILCO for over 30 years, retiring in 1997. He was a proud member of The American Legion Post 2910, serving on the Honor Guard for many years.

Cremation rites have been accorded and services for Melvin will be held at a later date in the Magnolia Cemetery with full military rites. Memorials can be made to The American Legion or St. Jude. Online condolences can be left at lenzmemorialhome.com

To send flowers to the family or plant a tree in memory of Melvin G. Skaggs, please visit our floral store.

To send flowers to the family in memory of Melvin Skaggs, please visit our flower store.