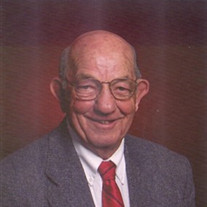 
He was born on September 4, 1925 in Eureka, IL a son
of David and Bertha Klopfenstein Wuethrich.  He married Pat
Graham on December 21, 1946 in Eureka, IL.  She survives.


He was preceded in death by one daughter-in-law,
Linda Wuethrich; four sisters, and two
brothers.


An Army veteran, he served his country during WWII
in the Pacific Theater. He was a member of the Eureka American
Legion Post #466 for 68 years.


Merle was a graduate of Eureka College where he
belonged to the Lambda Chi Alpha fraternity and the Eureka College
Athletic Hall of Fame.  He was also a charter member of the
Eureka Jaycees, Eureka Sportsmen's Club, and Chairman in Perpetuity
of the Annual Wuethrich Open reunion.


He was an avid baseball fan and had been a
professional pitcher for the Chicago Cubs organization.  Merle
coached and umpired Little League and Legion baseball games for 35
years.


Merle was a member of the Eureka Christian Church
where funeral services will be held at 10:00 am on Saturday, April
20, 2013.  Rev. Jennie Churchman will officiate.
Visitation will be held on Friday evening from 4-7 pm at the
Argo-Ruestman-Harris Funeral Home in Eureka.  Burial with
military rites will be in Olio Township Cemetery.


Memorial contributions may be made to Maple Lawn
Homes or the Eureka Christian Church.  Online condolences may
be sent to the family at www. ruestmanharrisfuneralhome.com

To send flowers to the family or plant a tree in memory of Merle Wuethrich, please visit our floral store.

To send flowers to the family in memory of Merle Wuethrich, please visit our flower store.