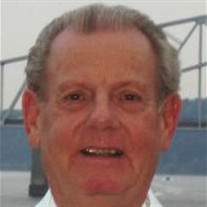 Merywon D. "Smitty" Smith of Lacon, formerly Pekin, died July 20, 2014 at 11:40pm at his home with his wife by his side. Born on July 7, 1938 to the late Chester and Marguerite Woodsworth Smith in Pekin, He graduated from Pekin High School in 1956.
Smitty served his country in the Army Reserves from 1961- 1976. On October 26 1996 he married Patsy Manning in Lacon, she survives.
Also surviving are His son Jeffery (Casey) Smith and daughter Jill (Dennis) Walraven both of Bartonville; Stepson Mark (Nikki) Manning of Sparland; grandchildren Chad Reiter, Dalton Smith, Nathan Manning, Brandon Storm, Dana Messick, Marissa Manning, Peyton Manning, and Hannah Manning; and great granddaughters Renee Filly and Averie Messick. He was also preceded by his father in law Merle Taylor and stepsons Kevin and Doug Manning.
In 1948 Smitty joined 2000 young musicians to play in Soldier Field; this was the first nationally televised event. The following day he played in a 40 piece marimba band on the shores of Lake Michigan.
He made a career at Caterpillar as a Skilled Trades Journeyman Machinist at the Tech Center for 35 years. Merywon was a member of the American Legion post 593 in Lacon, Pekin Masonic Lodge 126, and the Lacon Chamber of Commerce. Smitty joined the Coast Guard Auxiliary in 2002 obtaining the rank of District Captain East. With his love of boating he became an avid fisherman and charter Captain.
Visitation will be Wednesday July 23 from 5-7pm at Lenz Memorial Home in Lacon. Funeral Services will be on Thursday morning at 10:00, also at Lenz. Private Burial will be at Glendale Cemetery in Pekin. Memorials can be left to The Lacon Community Center or St. Jude. Online condolences can be left at lenzmemorialhome.com


To send flowers to the family or plant a tree in memory of Merywon "Smitty" Smith, please visit our floral store.

Please click here to view the video tribute
To send flowers to the family in memory of Merywon Smith, please visit our flower store.