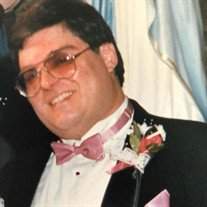 Nicholas J. Perino, 63, of Toluca, died on January 27, 2021 at Aperion Care in Toluca. Born on March 24, 1957 in Galveston Texas to the late Dr. Nicholas and Dolores (Prince) Perino, he was married to Ginny Gauwitz on October 14, 1989 in Peoria. They had one son.
Nick is survived by: his son Nicholas A. Perino of Galesburg, brother Chris Perino of Chandler Ariz.; sisters Michele (Anthony) Solowosky of Deerfield Beach Fla., Maria Perino of Gainesville Fla.; and grandchildren Aleeah and Jaxson.
Cremation rites have been accorded and private family burial will be at a later date. Memorials can be made to the ARK Animal Shelter and online condolences can be left at lenzmemorialhome.com

To send flowers to the family or plant a tree in memory of Nicholas J. Perino, please visit our floral store.

To send flowers to the family in memory of Nicholas Perino, please visit our flower store.