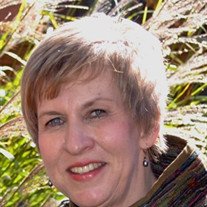 In addition to her husband, she is
survived by two sons, Aaron (Shannon) Spears, of North Liberty, IA,
Matthew (Rebecca) Spears, of Bloomington; a brother, Jerry (Mary)
Parker, of Delevan; a sister, Janet Dunn, of Evansville, IN; three
grandchildren, Kiah Spears, Noah Yost and Annika Yost.

She was preceded in death by her
parents and a brother in law, Hugh Dunn.

Nikki graduated with a BS from
Eastern Illinois University.  She was employed at Abraham
Lincoln Memorial Hospital in Lincoln for 17 years, and later she
was employed  as a Medical Technologist at Advocate BroMenn
Medical Center for 23 years.

Nikki was an avid gardener and
often could be found outdoors during the summer months. She enjoyed
traveling, live music and the arts, movies, and spending time with
her family.  Nikki was an enthusiastic reader, and was seldom
seen at home without a book nearby. Nikki was dedicated to her
work, and developed lasting friendships with her co-workers. She
truly cared about the work she did, and strived to do her best each
day.Nikki was a loving wife and mother.  She was a caring
employee, dedicated to her career.

A Celebration of Life service
will be at 12:30 p.m. on Sunday, February 9, 2014 at New Covenant
Community in Normal with Rev. Susan Ryder and Rev. Cheryl
Peterson-Harlan officiating.

A visitation will be from 3-5:00
p.m. on Saturday, February 8, 2014 at Kibler-Brady-Ruestman
Memorial Home in Bloomington.

Memorials in Nikki's honor may be
made to the Community Cancer Center, 407 East Vernon Ave., Normal,
IL 61761.

To send flowers to the family or plant a tree in memory of Nikki L. Spears, please visit our floral store.

To send flowers to the family in memory of Nikki L. Spears, please visit our flower store.