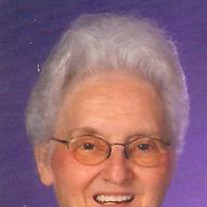 Norma was preceded in death by her parents, one sister Lois
Wiegand, three brothers, Ken, Willis and Robert Wiegand, and one
brother-in-law Sam Blunier.

She graduated from the Illinois Central College LPN program 40
years ago and worked at OSF St. Francis and the Eureka Apostolic
Christian Nursing Home.

Norma was a member of the Eureka Apostolic Christian Church and
the Eureka Hospital Auxiliary.

Norma touched many lives and was always fun to be with. Her
family and friends meant so much to her. Most importantly, Norma
loved the Lord.

Funeral services will be held at 10:00 a.m. on Tuesday, February
5, 2013 at Eureka Apostolic Christian Church. Church ministers will
officiate. Visitation will be held on Monday, February 4, 2013 from
4-8p.m. at the Goodfield Apostolic Christian Fellowship Hall and
from 9-9:45a.m. on Tuesday at the church. Burial will be in the
Olio Township Cemetery in Eureka. Argo-Ruestman-Harris Funeral Home
in Eureka is in charge of the arrangements.

Memorial contributions may be made to Apostolic Christian Home
of Eureka. Online condolences may be sent to the family atwww.ruestmanharrisfuneralhome.com.

To send flowers to the family or plant a tree in memory of Norma Hangartner, please visit our floral store.

To send flowers to the family in memory of Norma Hangartner, please visit our flower store.