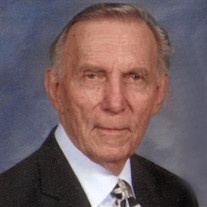 Norman J. Fischer, 82, formerly of Lacon, died on February 10, 2015 at 7:10 am at his assisted living residence in East Peoria. Norm passed peacefully surrounded with love and family. He was born on January 13, 1933 to the late Carl and Adelia Kusgen Fischer in Council Bluffs, IA. He married Gloria Hattam on September 8, 1956 in Council Bluffs.

Norman worked for Mutual of Omaha as a division manager for 33 years. He also worked for Bankers Life Insurance and Wall St. Insurance Agency. Norman served in the Army in Germany during the Korean War. He was a member of the Lacon Congregational United Church of Christ.

He was preceded in death by his brother Vernon and sister Arlene Bryson.

Cremation rites have been accorded and a memorial service will be held on February 22, 2015 at 1pm at the Lacon Congregational United Church of Christ. Reverend Ross Wyman will officiate. A memorial service at St. John's United Church of Christ, Council Buffs, IA; and burial in the Crestview Cemetery will be held at a later date. Memorials can be made to his church. Online condolences can be left at lenzmemorialhome.com

To send flowers to the family or plant a tree in memory of Norman J. Fischer, please visit our floral store.

To send flowers to the family in memory of Norman Fischer, please visit our flower store.