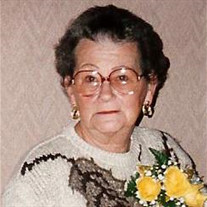 She was born on October 26, 1925, in Henry a daughter of Gertrude "Pat" Haws West Spangler and Chester LaVern West. After her father's death, her mother married Wayne L. Spangler and he raised her and her sisters. She married David E. Baldwin Jr. in 1945, again in 1978. He died in 2010.

She was preceded in death by her parents, her husband, one son, Michael L. Baldwin, and one sister, Beverly J. Pulling.

She graduated from Magnolia High School in 1943.

Cremation Rites have been accorded. There will be a graveside service at a later date at Crow Meadow Cemetery.

Memorials may be given to a charity of the donor's choice. Lenz Memorial Home in Lacon is in charge of arrangements. Online condolences may be directed to her family at www.lenzmemorialhome.com.

To send flowers to the family or plant a tree in memory of Patricia L. Baldwin, please visit our floral store.

To send flowers to the family in memory of Patricia Baldwin, please visit our flower store.