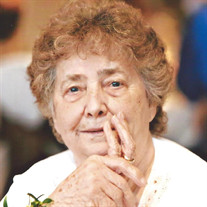 Patricia (Pat) A. Nave, 87, of East Peoria formerly Chillicothe died on August 30, 2016 at Manor Care at Riverview in East Peoria.

She was also preceded in death by two sisters, Mildred Harms and Evelyn Myers and one brother Eugene (Butch) Pape.

Cremation rites have been accorded and a private family burial of ashes will be at a later date. Online condolences can be left at lenzmemorialhome.com

To send flowers to the family or plant a tree in memory of Patricia "Pat" Nave, please visit our floral store.

To send flowers to the family in memory of Patricia Nave, please visit our flower store.