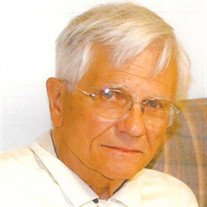 Paul was born on December 20, 1922
in East Lawn, IL, a son to Rev. Walter B. And Rachel (McRoberts)
Theobald.  He married Josephine L. Fagerburg on February 24,
1946 at First Baptist Church in Bloomington.  She
survives.

Paul was preceded in death by his
parents, and his son, Peter G Theobald, two sisters and two
brothers.

He graduated from Bloomington high
School in 1941.  After high school, he attended Illinois
Wesleyan University for his pre-med education, then attended
University of Illinois Medical School at Chicago.  Dr.
Theobald practiced family medicine in Bloomington from 1953 until
retiring in the mid 1990's, serving four generations of
families.

Dr. Theobald proudly served his
country in the U.S. Army during WWII as part of the 45th
Portable Hospital Unit, also considered a M.A.S.H. unit. While
serving from 1943-1946, he was stationed in China, Burma and
India.

His greatest love was spending time
with his family and enjoyed attending all of his grandchildren's
activities.  Paul also enjoyed many special friends during his
lifetime.  He enjoyed fishing, hunting, snowmobiling and
enjoyed his time spent flying airplanes.  Paul loved his
computer and took classes to learn how to utilize it.

Funeral service will be held at 11
a.m. on Thursday, December 19, 2013 at First Baptist Church in
Bloomington with Rev. Adam M. Davis officiating.  Visitation
will be from 9 a.m. until 11 a.m. on Thursday at the church.
Full Military Rites will be accorded by the Bloomington-Normal
American Legion Honor Guard at the church.

Interment will be at Park Hill
Cemetery in Bloomington.  In lieu of flowers, memorials may be
directed to LOGOS at First Baptist Church in Bloomington.
Kibler-Brady-Ruestman Memorial is assisting the family with
arrangements.

Online condolences and memories of
Paul may be sent to the family at kiblerbradyruestman.com.

To send flowers to the family or plant a tree in memory of Paul G. Theobald, please visit our floral store.

To send flowers to the family in memory of Paul G. Theobald, please visit our flower store.