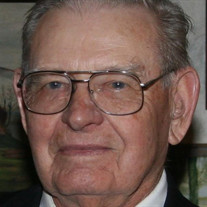 Ralph Leland Monier, 98, of Lacon, passed away Sunday, August 21, 2016 peacefully at his home. He was born January 29, 1918, in Sparland, to the late C. Leland and Vivian Weller Monier. He was the oldest of three sons.

He married Ilene Steffens of Toluca on August 28, 1948 at the St. John's Lutheran Church of Toluca. She survives celebrating 68 years of marriage.

Ralph farmed in the rural Sparland area and was in business with his two brothers and father as Monier Hybrids before moving to Lacon in 1982. He then continued farming by helping his son.
He was baptized June 8, 1930 in the Methodist Church of Sparland. In 1960 Ralph became a member of LaPrairie United Presbyterian Church of Sparland. He served as an elder for many years and continued to attend.

He attended grade school at the Drake School in Steuben Township. He graduated from Sparland High School in 1936. Ralph served on the Sparland school board for 18 years.

He was a World War II Navy veteran. He enlisted August 25, 1943 and served on the islands of Guam, Aniwetok, and Banika in the South Pacific during 1944-45. He was discharged February 22, 1946 as a Motor Machine Mate 2nd Class.

He enjoyed woodworking, lapidary, playing cards and traveling. Many winters Ralph and Ilene enjoyed Phoenix, Arizona with their Airstream.

Visitation will be Friday, August 26 from 5 - 7 pm at Lenz Memorial Home and one hour prior to the service at the church. Services will be August 27, 2016 at 11 a.m. at the LaPrairie United Presbyterian Church in rural Sparland. Burial will be in the church cemetery. Memorials may be made to his church, LS-52, or St. Jude Children's Research Hospital. Online condolences can be left at lenzmemorialhome.com

To send flowers to the family or plant a tree in memory of Ralph Monier, please visit our floral store.

Please click here to view the video tribute
To send flowers to the family in memory of Ralph Monier, please visit our flower store.