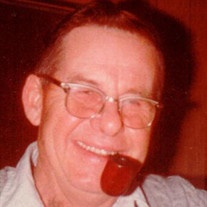 Ray L Stickel, 95, of Lacon, died at Unity Point Proctor Hospital in Peoria on May 18, 2017. Born to the late Charles and Lena Rickey Stickel in rural Lacon Township on February 12, 1922, he married Phyllis Grieves October 4, 1943 in Lacon. Phyllis died on January 13, 2006.
Ray owned and operated Stickel Oil Company in Lacon for over 30 years. He later worked at Marshall County Highway Department retiring in 1987. Ray served our country during WWII in the Coast Guard and was a member of the Lacon American Legion Post 593. Ray served our community as a volunteer of the Lacon Sparland Fire Department for many years and as a Lacon alderman. He was the last Original Member of the 15 Club and past member & president of the Lacon Country Club.
Ray is survived by: his son Blake (Marilyn) Stickel of Lacon; grandchildren Jeff (Carmen) Stickel of Indianapolis IN, David (Beth) Stickel of Charleston SC, James (Wendi) Roach of Lacon, Charles (Theresa) Roach of Niceville FL, Matt (Serina) Stickel of Lacon, Jim (Cathi) Hendricks of Batavia, Jake Hendricks of Madison WI, Ryan (Jessica) Sule of Eagan MN, Sonya (Josh) Engle of Elburn, Julia Snyder of Rockford; 16 Great grandchildren; and Nephew Marvin Clawitter of Arizona. Ray was preceded in death by his daughter Marcie Sule Hendricks, son Ted Stickel and sister Lois Clawitter.
Cremation rights have been accorded and a memorial service will be held Saturday May 27th at 2 PM at Lenz Memorial Home in Lacon with a visitation from 12 to 2pm before services. Burial and military rites will be in the Lacon City Cemetery immediately following. Memorial contributions can be made to the Lacon Sparland Fire Department and online condolences can be left at lenzmemorialhome.com


To send flowers to the family or plant a tree in memory of Ray L. Stickel, please visit our floral store.

Please click here to view the video tribute
To send flowers to the family in memory of Ray Stickel, please visit our flower store.