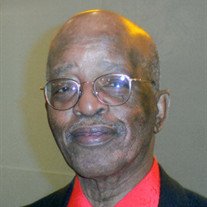 Reverend Leo Sneed
Normal. Rev.Leo Sneed, 86, of Normal, departed this life early
Thursday morning on February 22, 2013. Home going services will be
at 12:00 noon on Thursday, February 28, 2013 at Union Missionary
Baptist Church, 509 W. Jackson Street, Bloomington, Illinois. Rev.
Dr. Phenues Bush will officiate. Visitation will be one hour prior
to services at the church. Burial will be in Evergreen Cemetery,
Bloomington. Kibler- Brady-Ruestman Memorial Home is assisting the
family with arrangements

Rev. Sneed was born October 9, 1926
in Chicago, Illinois, to Frank and Cassie (Tabor) Sneed.  In
1944, he married Miss Annie B. Sneed, his wife of 68 years.Leo is
survived by family he truly loved, including his devoted wife:
Annie B. Sneed, of Normal, IL; two sons: Carl (Chantal) Sneed and
Julian (Nancy) Sneed of Bloomington, IL; one daughter:
Jennifer  Sneed (Scott McMillan) in Niskayuna, New York; four
adored grandchildren - Ragan, Kyle, Jordan, and Simone; one sister
- Florence Herron in Chicago, Illinois, and many nieces, nephews.
Also surviving are a host of other relatives, as well as South
Calvary and Union Baptist church families and many friends.

He was preceded in death by his
parents and five siblings: Tekoa, Spencer, Frank Jr., Leroy, and
Annie Chapman.

Rev. Sneed grew up in the innercity
and attended the public schools of Chicago, graduating from the
Wendell Phillips High School.  In 1953, he answered the call
to preach andenrolled in the Moody Bible Institute in Chicago,
Illinois.  In 1957, he accepted the call to pastor the Mt.
Pisgah Baptist Church in Bloomington, Illinois.

During his pastorate, Rev. Sneed
availed himself of the many educational opportunities in the
community and played a leading role in the civil rights movement of
the 1960s both locally and nationally.  In 1964, Rev. Sneed
travelled to Hattiesburg MS, along with two white ministers:
Rev Norquist (pastor of Bloomington First Presbyterian Church) and
Rev. Goodrow (pastor of the LeRoy Presbyterian Church), to work in
registering African-Americans to vote.  Rev. Sneed was active
in numerous community activities focused on improving race
relations during that time.

Reverend Sneed served as pastor of
the South Calvary congregation for 36 years.  Over the years,
he served as 1st Vice President for the Consolidated
State Convention, Chairman of the State Foreign Mission Board, and
member of the National Foreign Mission Board of the National
Baptist Convention U.S.A.Reverend Sneed was one of the founders of
the Progressive District Association. He was an active member of
the Indianapolis Baptist Ministers' Alliance.

Pastor Sneed was always especially
interested in children and youth, and encouraged education.
He was a charter member of the Indianapolis Churches for
Educational Excellence which was founded in conjunction with
Indiana University Purdue University at

Indianapolis, and served as its
Treasurer. He also served as Vice President for Indiana One Church
One Child.

Pastor Sneed retired from the South
Calvary Baptist Church in March 2008 for health reasons and he and
his Mrs. Sneed returned to Bloomington in July of that year.
He leaves to cherish his memories; a  family  he truly
loved. The family wishes to thank Dr. Kindred of the Medical Hills
Internists group and the director, administrators and staff of the
Evergreen Village who provided such loving care at Rev.Sneed's
residence.

Condolences and expressions of
sympathy may be directed to the family either at Evergreen Village,
1701 Evergreen Blvd. Normal IL 61761 or online at kiblerbradyruestman.com. Memorial contributions
in his honor may also be directed to Alzheimer's Association of
Mclean County.

To send flowers to the family or plant a tree in memory of Rev. Leo Sneed, please visit our floral store.

To send flowers to the family in memory of Rev. Leo Sneed, please visit our flower store.