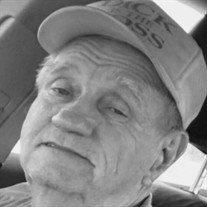 Richard Ralph Antrim, 84, of Byron Illinois, passed away on August 30, 2018 at Generations at Neighbors long term care in Byron. Born in Varna Illinois on January 5, 1934 to the late Wesley O. And Dorothy Marie Tuttle Antrim, he married Patricia Smith June 28, 1958 and had three daughters. Dick served his country in the Navy and was a millwright at J&L/ LTV Steel in Hennepin for over 25 years.
Dick enjoyed outdoor activities which included boating, fishing, yardwork, and building things. He was known for his hog roasts from big cookers he had built. One of his greatest pastimes was planting a huge garden and then giving his vegetables to anyone in need. Dick liked helping others and caring for his dogs through the years. His last dog "Lady" was a loyal and a great companion to him. Another pastime he enjoyed was playing dominoes with his lady friends. Dick like to stay active and loved to tell stories of his travels as an assistant tour operator. He traveled around the United States by bus and the Bahamas & Caribbean by cruise ship. Dick served in the Navy (but could not swim) and was on the water any chance he had. He loved taking his children and grandchildren on his boat. Dick like to make people smile with his sense of humor and jokes, but he never held back on his opinion if he disagreed with you, he will be missed by many but most of all his family.
Dick is survived by three daughters Debbie Wright of Princeton IL, Deanna Stephens of Tampa Fl, and Cindy Forrest of Richmond IN; brother Charles Antrim of Essex MO, sister Bev Boers of Bremerton WA, grandchildren Mike Wright of Henry IL, Brandi Wright of Mark IL, Amber Stephens of Peoria IL, Cheryl Stephens of Crest Hill IL, Amanda Testa of Bartlesville OK, Rose Forrest of Greeley CO, Katie Jo Fuchs of Granville IL, Alisha Antrim of Beaver Creek OH, Tyler Ozga of Richmond IN; and 21 great grandchildren. He was also preceded in death by sister Susan Renken and brother Gene Antrim.
Cremation rites have been accorded and a graveside service will be held at the Lacon Cemetery on Sunday October 7, 2018 at 12pm noon. Memorials can be made to Heartland Hospice 6000 East State St. Suite 300 Rockford, IL 61107. Online condolences can be left at lenzmemorialhome.com

To send flowers to the family or plant a tree in memory of Richard "Dick" Antrim, please visit our floral store.

To send flowers to the family in memory of Richard Antrim, please visit our flower store.