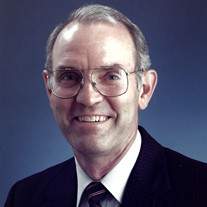 Richard E. Ford, Professor Emeritus, 86, of Lacon Illinois, formerly of Ames, IA, Urbana, IL, and Corvallis, OR, died on November 20, 2019 at St. Joseph Nursing Home in Lacon. Born on May 25,1933 in Des Moines Iowa to the late Victor and Gertrude Headlee Ford, he married Roberta Essig on June 20,1954 and had three children. He later married Stephanie Rennick on March 30, 1996 in Champaign.
Richard received his BS in Botany in 1956 from Iowa State University in Ames and his PhD in Virology from Cornell University in 1961. With the discovery of corn blight in the 60s, Dr. Ford was a leader in the effort to solve this problem affecting our nation's food supply. During his 20-year tenure as Professor and Head of the Plant Pathology Department at the University of Illinois, Dr. Ford expanded the department while continuing his virology research and teaching. He served on and chaired numerous national & international committees, professional societies, and was an integral part of the green revolution in feeding the world. Dr. Ford served as President of the American Phytopathological Society (APS) and the National Farmhouse Fraternity.
He is survived by his children: Nina (Jim) Dippel of Columbus OH, Linda (Ed) Glaser of Lacon IL, Steve (Becky) Ford of St. Joseph IL, siblings: twin brother Robert (Carol) Ford of Indianola IA, Donna Schneider of Lynchburg VA, Vikki Ford of Reno NV, Loa (Byrd) Christensen of Huxley IA, Dan (Sue) Ford of Audubon IA, sister-in-law Patti Ford of Council Bluffs IA; nine grandchildren; and 15 great grandchildren. He was preceded in death by his son Kent Richard Ford, brother Lynn Ford, and brother-in-law Richard Schneider.
Growing up on a farm in Iowa gave Dick his strong work ethic and his talent for do-it-yourself projects. He and his twin brother played their share of practical jokes by switching identities around family and associates. Dick was an avid handball player much of his life, loved salmon fishing, and most of all loved to play on the floor with the kids and grandkids.
A memorial service will be held on December 14, 2019 at Calvary Bible Church in rural Lacon at 12 noon, with a time of visitation one-hour prior to the service. Memorial contributions can be made to the Calvary Bible Church AWANA program or the APS Foundation. Online condolences can be left at lenzmemorialhome.com.


To send flowers to the family or plant a tree in memory of Richard E. Ford, please visit our floral store.

Please click here to view the video tribute
To send flowers to the family in memory of Richard Ford, please visit our flower store.