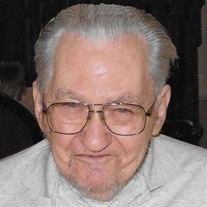 HENRY, IL Richard A Higgins, age 89, of Alexandria, VA, died on Saturday, December 30, 2017, in Heartland Healthcare Nursing Home in Henry, IL.
Richard was born March 29, 1928 in Elizabeth City County, Virginia. He was the only child of George Judson and Florence Iola Higgins formerly of Pebble Beach, CA who have preceded him in death.
Richard attended the Citadel Military School in Charleston, SC during WWII. He left school to serve in the Army in 1945 as a Weather Forecaster. After the war, he enlisted in the Army Reserves and was called back to active service during the Korean War. After the war, he attended New Mexico State University and Penn State University where he graduated with a degree in Theater. He designed production sets for theaters for a few years then went back to weather forecasting for the National Weather Service in Alexandria, VA. He retired from the Weather Service in 1988 after serving 31 years. He remained in Alexandria during his retirement and moved to Illinois in July, 2017 to be closer to relatives and resided the Heartland Care Center in Henry.
Richard had a passion for Trains and Model Railroading. He was a member of the National Model Railroading Association most of his adult life, was very active with his local chapter, and served as treasurer for several years. He was a lifetime member of the American Legion and supported several veteran related charities. He supported several other charities as well, especially those aimed at underprivileged American Indians.
Cremation rites have been accorded and a memorial service will be held at a future date. In lieu of flowers, memorials may be sent to Saint Joseph's Indian School, PO Box 300, Chamberlain, SD 57325-9919. The obituary can be viewed and online condolences can be made through Lenz Memorial Home at www.lenzmemorialhome.com.

To send flowers to the family or plant a tree in memory of Richard A. Higgins, please visit our floral store.

To send flowers to the family in memory of Richard Higgins, please visit our flower store.