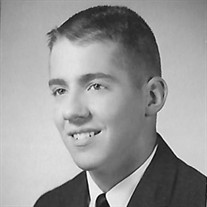 Richard Lee "Rick" Keating, 74, of Varna Ill., died on October 29, 2020 at UnityPoint Methodist in Peoria. Born in Marseilles on January 12, 1946 to the late Richard and Jane (Bradford) Keating, he married Patricia Burke on May 11, 1968 in Chicago. She died on March 16, 2006. He then married Debra Halun on July 7, 2007 in Wauconda, Illinois.
Rick ran a graphic design and silk-screening business from his home in downtown Varna. He also published many newsletters for clubs and organizations around the country.
Richard is survived by his wife Debra; brothers Charles (Mary) Keating of Annapolis Md. and Thomas (Ann Sones) Keating of Lac du Flambeau Wisc.; Aunt Mary Jane Ziegler of North Carolina; cousins Michael, Kathy, John, Randall, Janet, and James; nieces Christine and Karen; nephew Kevin; and his beloved cat, Callie. He was also preceded in death by his cousin Sandy.
Rick was an avid member of the 104th Illinois Volunteer Infantry, the Marshall County Historical Society and the Massey Collectors Association.
Cremation rights have been accorded and Rick's cremains will be scattered according to his wishes at a later date. In lieu of flowers, memorials can be made to the A.R.K. Humane Society, Varna Fire & Ambulance, or a charity of your choice in his name. Online condolences for his family can be left at lenzmemorialhome.com

To send flowers to the family or plant a tree in memory of Richard Lee Keating, please visit our floral store.

To send flowers to the family in memory of Richard Keating, please visit our flower store.