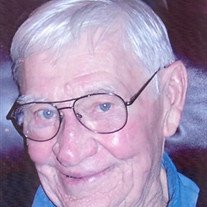 
Eureka- Richard Lantz Dickinson, 87, of Eureka, IL,
formerly of Congerville, passed away at 4:00 a.m. on Wednesday
February 27, 2013 at the Apostolic Christian Home of Eureka.


He was born on August 31, 1925 in Eureka, IL to
Richard and Mildred Lantz Dickinson. Richard graduated from Eureka
High School and then went into the Army Air Corp where he served
his country from September of 1943 to November of 1945 as a
bombardier and radar navigator during WWII.


After the war, Richard attended the University of
Illinois, he then started farming with his grandfather, Senator
Simon E. Lantz. He met the love of his life Annette Schultz at
Eureka College and the two were married on September 6, 1947 in
Bartlett, IL.


After marriage, Richard continued farming in
Congerville with his grandfather raising purebred Angus cattle in
what is today the fifth oldest Angus herd in the nation.


Richard enjoyed sailing and extensive travel with
his wife, Annette. He loved to spend time with his family and
enjoyed tending to his tomatoes in the garden.


He was preceded in death by one daughter, Linda
Lytle.


Richard was a member of the Eureka Christian Church
where funeral services will be held at 10:00 am on Saturday March
2, 2013. The Rev. Jennie Churchman will officiate. Visitation will
be held on Friday from 5-7 pm at Argo-Ruestman-Harris Funeral Home
in Eureka. Burial will be at Olio Township Cemetery in Eureka.


Memorial contributions may be made to the Eureka
Christian Church or to Eureka College. Online condolences may be
sent to the family at ruestmanharrisfuneralhome.com
.

To send flowers to the family or plant a tree in memory of Richard Lantz Dickinson, please visit our floral store.

To send flowers to the family in memory of Richard Lantz Dickinson, please visit our flower store.