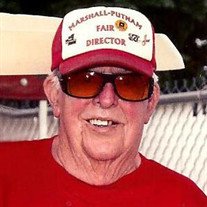 Bud was a park ranger at the Marshall County Conservation Area for Illinois DNR for over 30 years, retiring in 1997. He also was a member of the Marshall Putnam Fair Board since 1988.

Bud served his country in the Army at Fort Bragg. He loved spending time with the grandboys, especially during county fair time when they would help work Bud's gate.

Cremation rites have been accorded and a memorial service will be held at a later date. Burial of ashes will be in the Henry Cemetery. Memorials can be made to the Marshall Putnam County Fair in Bud's name. Online condolences can be left at lenzmemorialhome.com.

To send flowers to the family or plant a tree in memory of Richard "Bud" McAllister, please visit our floral store.

To send flowers to the family in memory of Richard McAllister, please visit our flower store.