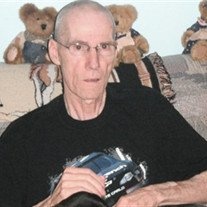 Funeral services will be held on
Tuesday, August 6, 2013 at10:30 am at Kibler-Brady-Ruestman
Memorial Home in Bloomington Rev. Richard Gray officiating.
Visitation will be held on Monday, August 5, 2013 from 4:30-7 pm at
the memorial home.

Interment will be in Evergreen
Memorial Cemetery in Bloomington.In lieu of flowers, memorials may
be made to St. Luke Union Church, or to the family in Bob's name.
Kibler-Brady-Ruestman Memorial Home in Bloomington has been
entrusted with Bob's arrangements.

Bob was born on March 3, 1950 in
Flora, IL, a son of Francis Albert and Gladys (Ellis)
Stanford.  He married Sharon Swallow on July 24, 1977 in
Bloomington at Assembly of God Church.  She survives.

He was preceded in death by his
parents, and one brother, Bill Stanford.

Early on in Bob's life he worked
for Bob Johnson's restaurant then later worked for Bob Knapp doing
catering and had also worked at the Ponderosa restaurant, and for
the GTX Parts Factory. In 2001 he started as a night time custodian
for District 87 and in 2010 he retired due to health
reasons.

Bob will be missed by his family,
friends and his dog, Scooter. It broke our hearts to lose you, you
did not go alone, for part of us went with you the day God called
you home.

To send flowers to the family or plant a tree in memory of Robert D. "Bob" Stanford, please visit our floral store.

To send flowers to the family in memory of Robert "Bob" Stanford, please visit our flower store.