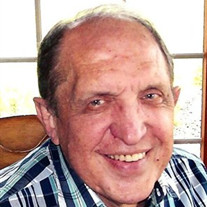 He was born on May 3, 1944 in Pittsfield, IL the son of the late
Charles and Ellen Geraldine Starman Cook.  He married Lisa
Pottinger on December 21, 1968 in Washburn, IL.  She
survives.

He was preceded in death by his brother-in-laws,  Barry
Flanagan and Tom
Pottinger.


Robert worked for 38 years at Caterpillar, Inc. and was a part
time night manager at Jim's IGA and Sav Mor Liquors.  He had
also served as a part time police officer in Lacon and Chief of
police in Washburn in the 1960's.

He was a Naval reservist who received honorable discharge and a
member of the Lacon American Legion Post #593.  He was also
active with the UAW 974.

Funeral services will be held at 10:30 am on Monday, March 25,
2013 at the Lenz Memorial Home in Lacon, IL.  Robert Murphy
will officiate.  Visitation will be held on Sunday from 3-5 pm
at the funeral home.  Burial will be in the Immaculate
Conception Cemetery in Lacon with military honors.

Memorial contributions may be made to Lacon/Sparland LS-52
Ambulance or the Altar and Rosary Society.  Online condolences
may be sent to the family at
lenzmemorialhome.com.

To send flowers to the family or plant a tree in memory of Robert E. Cook, please visit our floral store.

To send flowers to the family in memory of Robert E. Cook, please visit our flower store.