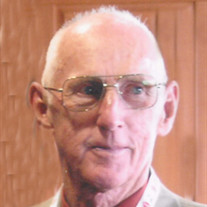 His Celebration of Life service
will be held from 1-4:00 p.m. on Sunday, June 8, 2014 at Ironwood
Golf Course Club House in Normal. Kibler-Brady-Ruestman Memorial
Home in Bloomington is assisting the family with arrangements.

Bob was born on November 3, 1931 in
Piper City, IL, a son to James and Mabel (King) Doran. He married
Phyliss Cox on September 8, 1956 at First Presbyterian Church in
Fairbury, IL. She survives.

He was preceded in death by his
parents; 2 brothers, Donald Doran and Richard L. Doran; and 3
sisters, Dolores Emmerling, Patricia Aberle and Norma
Henderson.

During his high school years, Bob
lived with Don and Millie Barnes and their young daughters, Bonnie
and Cathy. They were his second family and their love and support
had a great influence on his life.

Bob worked as a mail carrier for
the Normal Post Office and also as a driver for Nussbaum Trucking
in Normal for 24 years. For many years on Saturday mornings, Bob
drove a truck donated by Nussbaum Trucking to Peoria to transport
food for the SHARE food program for distribution in
Bloomington-Normal. Bob also volunteered many times for the Gary S.
Johnson Free Dental Clinic.

He was a member of the Suburban
Teamsters of Northern Illinois, Local #179.

One of Bob's hobbies, which gave
him great joy, was owning Illinois standardbred horses in
partnership with two fine gentlemen, Dan Carmody and Kay Ward. He
had fun attending the Kentucky Derby and Breeders Cup races with
his son, Steve and friends.

Bob was a quiet, caring man of
integrity who loved and cared for his family, community and this
country. Everyone who knew Bob will miss his Irish wit!

To send flowers to the family or plant a tree in memory of Robert "Bob" E. Doran, please visit our floral store.

To send flowers to the family in memory of Robert E. Doran, please visit our flower store.