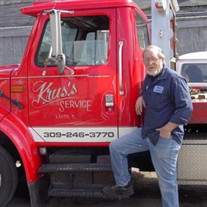 Robert L Krus, 77, of Sparland, Illinois, died on September 21, 2020 at Heartland Healthcare in Henry Ill. Born in Peoria on February 1, 1943 to the late Henry and Virginia (Beecher) Krus he Married Shirley Martin on August 8, 1966 in Peoria. Shirley died May 5, 2006. He was also preceded by his brother Dalarry Krus.
While Bob worked at Caterpillar for 30 years, retiring as a machine operator, he also ran his own mechanic and towing shop in Lacon. Bob loved the camaraderie of folks stopping by his shop, getting their car fixed or just visiting. As an Air Force veteran, he belonged to the Lacon American Legion and was a proud member of UAW 974.
Bob is survived by his sons Victor (Tina) Krus of Sparland, Steven Underwood of Indiana, Tracy Krus of Sparland, 12 grandchildren, and 33 great grandchildren.
Cremation rights have been accorded and a private family burial will be in the Sparland cemetery at a later date. Memorials can be made to Lacon American Legion Post #593 and online condolences may be left for Bob's family at lenzmemorialhome.com

To send flowers to the family or plant a tree in memory of Robert L. Krus, please visit our floral store.

To send flowers to the family in memory of Robert Krus, please visit our flower store.