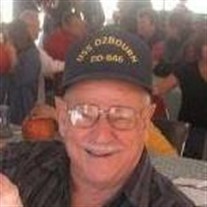 Robert H. Miller, 88, of Varna IL, died on October 9, 2018 at Heartland Healthcare in Henry IL. Born October 6, 1930 in Teutopolis, IL the oldest son of the late John and Helen Pals Miller, he married Vivian Jo Ann Cox on May 8, 1954 in Greenup Illinois. Jo Ann died on March 25, 1994.
Bob was raised on the family's dairy farm until he left to join the National Guard and the Navy during the Korean War. During the war Bob served as a Cockswain transporting troops from ship to land in his boat. After the war, Bob continued to enjoy boating with friends & family at Lake Wildwood, where he & Jo Ann and their four children had relocated. He served on many committees developing the expansion and development of Lake Wildwood during its early years. He made his living driving a refrigerated truck for Midwest Emery until he started his own company Robert Miller Trucking. He successfully drove for himself until his retirement.
Bob enjoyed traveling in his motor home to visit friends and family. He also enjoyed watching the deer and other wildlife when they would visit his yard.
Bob is survived by: his sons Robert Jr. of Varna & William (Laurie) Miller of Chillicothe; daughters Patricia (William) Burnell of Strafford NH & Linda (James) Strange of Altamont; brother Clarence Miller of Teutopolis; grandchildren Jacob (Kalli) Branson of Washington DC, Benjamin (Heather) Burnell of York ME, Nathan (Jaymie Frederick) Burnell of Branford CT, Alan Burnell of Burlington VT, Callie (George) Baker of Peoria Heights, Joseph Miller of Roanoke, Justin Graze of Mossville, Susan Strange of Effingham, Nancy (John) Wurtsbaugh of Neoga; and two great grandchildren, Theodore & James. He was also preceded in death by three siblings Thomas, Joseph, and Ruth.
A Mass of Christian burial will be held on Monday, October 15 at 10 AM at Immaculate Conception Church in Lacon. Visitation will be from 4 to 6 PM October 14 at Lenz Memorial Home in Lacon with Father John Mujuni officiating. In lieu of flowers memorials can be given to the American Heart Association or for the saying of Mass. Burial will be in the Immaculate Conception Cemetery and online condolences can be left at lenzmemorialhome.com

To send flowers to the family or plant a tree in memory of Robert H. Miller, please visit our floral store.

To send flowers to the family in memory of Robert Miller, please visit our flower store.