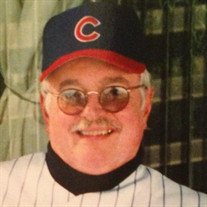 He was born July 11, 1936, in Springfield IL, the son of Earl G. and Esther (Finnegan) Wall. He was a 1954 graduate of Bloomington High School and graduated from Bradley University in 1958, where he was a two-time letterman in tennis. After graduation, he was a member of the U.S. Army. Robert was a longtime resident of Lacon. In the mid 1960's, he became an insurance agent working with Walter Head of the Head Insurance Agency. Soon after, they formed a partnership with the Head and Wall Insurance Agency that lasted over 40 years. He retired in 2001.

He married Elizabeth (Lay) Crawford in 1959 and they had two children. He later married Audrey Miller on May 12, 1990. Bob is survived by his wife, Audrey, son Michael (Keri) Wall and daughter Cynthia (Wall) Milligan; Julie and Denny Bogner, Jay and Marie Miller; and grandchildren Brenden Wall, Kailyn Wall, Caitlyn Milligan and Michaela Milligan, Ashley (Logan) Pufhal, Travis Bogner, Courtney Reiker and Andrew Miller. He was preceded in death by his parents.

Cremation rites have been accorded and a memorial service will be held on Saturday, April 30th, at 12:00 p.m at Lenz Memorial Home in Lacon. Visitation will be from 10:00am - 12:00 p.m. Burial will follow at the Lacon Cemetery. A celebration of life gathering will occur at the Lacon American Legion Post #593 beginning at 1:00 p.m.

Memorials can be made to Lacon American Legion Post #593. Online condolences can be left at lenzmemorialhome.com


To send flowers to the family or plant a tree in memory of Robert "Bob" Earl Wall, please visit our floral store.

Please click here to view the video tribute
To send flowers to the family in memory of Robert Wall, please visit our flower store.