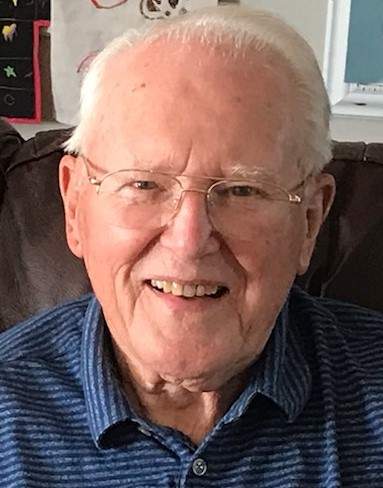 Robert D. Petrich of Lacon, died peacefully with his family by his side on December 31, 2021 at Henry Rehab & Nursing Center, Henry, IL, he was 93.

He was born December 28, 1928 in Lacon Illinois to the late Henry and Avelda Lewis Petrich. Bob married Anita Flynn on September 17, 1955, she survives. He was also preceded in death by his sister, Betty Burnham.

Bob graduated from Lacon High School and upon graduation served in the U.S. Navy.  He worked for Cilco for 40 years retiring January 1, 1991.  He was very active in the Lacon community having been a Scout Master, Member of the Jaycees, served on the Lacon Community Center Board, Lacon Cemetery Board, Marshall County Historical Society Board and spent several years as a volunteer ambulance driver for LS-52. He was a member of the American Legion and the Lacon Country Club. Bob was also a member of the Lacon Congregational Church where he was a Sunday School teacher, Moderator, Trustee and Deacon.  He was very honored to go on the Honor Flight to Washington DC with his son Tom in 2016.

Cremation rites have been accorded and a private graveside service will be held at a later date in the Lacon Cemetery. Memorials can be made to the Lacon Congregational Church or Greater Peoria Honor Flight and online condolences can be left for the family at lenzmemorialhome.com

To send flowers to the family or plant a tree in memory of Robert D. Petrich, please visit our floral store.

To send flowers to the family in memory of Robert D. Petrich, please visit our flower store.