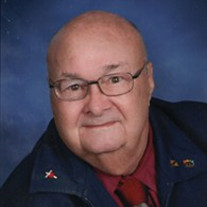 Eureka-Robert "Bob" Lillie, 84, of Eureka, Illinois, and
most recently of Phoenix, Arizona moved to his new residence in
Heaven on February 17, 2014.


He was born August 26, 1929 in Chicago to Robert A.
and Lillian Chandos Lillie. He married Carol Blunier on September
4, 1955. She died April 17, 2001. He is survived by one son, Robert
G. (Ingrid) Lillie of Louisville, KY; one daughter, Robin (Jerry)
Crow of Phoenix; two grandchildren, Aaron and Acacia. He was
preceded in death by his twin brother.


He was a graduate of Eureka College and had a
Masters degree from Bradley University. He served in the Army
during the Korean War, and was a member of Post #466 American
Legion in Eureka. He was a teacher and principal in four school
districts in Woodford County.In 2008 he was inducted into the
Greater Peoria Athletic Hall of Fame along with two undefeated
Metamora High School Football teams from 1966 and 1968 that he
coached.


He was active in the Peoria Cursillo, where he was
the rector of Peoria Cursillo 606 and the Walk to Emmaus where he
was the lay leader of Central Illinois Walk #71. He has served on
the Prison Advisory Boards of Faith, Hope and Love and was active
in prison ministries.


In recent years he taught a men's Bible study at the
Cross in the Desert United Methodist Church in Phoenix, Arizona. He
was the author of two books, "Dying with Carol" and "Sermons by a
Sinner."


A memorial service and celebration of life will
be held at the Eureka United Methodist Church, Eureka, IL on March
22 at 10:00 am. Rev. Ron Martz will officiate. The family will
receive friends from 9:15 until the start of the service.
Argo-Ruestman-Harris Funeral Home is assisting the family
with arrangements.


Memorials may be made to his church or any Walk to
Emmaus or Cursillo Community.  Online condolences may be sent
to the family at www.ruestmanharrisfuneralhome.com.

To send flowers to the family or plant a tree in memory of Robert Lillie, please visit our floral store.

To send flowers to the family in memory of Robert Lillie, please visit our flower store.