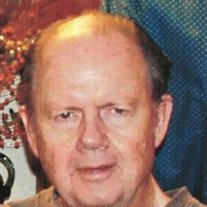 
Eureka - Ronald Dwaine Johnson, 74, of rural Eureka, IL, passed
away at 8:53 am on Wednesday November 20th 2013 at the
OSF St. Francis Medical Center in Peoria, IL, after many years of a
courageous battle with complications due to Parkinson's Disease
Dementia.


He was born on January 2, 1939 to John and Odelia Rippel Johnson.
He graduated from Roanoke-Benson High School in 1957 where he met
his future wife Alice Oltman. They were married January 10, 1960 at
St. Paul Lutheran Church in Benson, IL.


Ron and Alice raised their family in the home his grandfather
built in the early 1900's. Ron was a progressive corn and soybean
farmer his entire life and farmed with brother Rodney. Ron was also
a skilled carpenter and enjoyed working on projects.


Ron had a passion for travel which included journeys to Canada,
Alaska, Mexico, Hawaii, China, South America and many Carribean
Islands. Much of the American West was explored with his family via
pickup camper. He was an enthusiastic snow skier and enjoyed an
occasional snowmobile trip to the Tetons and Yellowstone National
Park.


He was a faithful member of the Trinity Lutheran Church in Roanoke
and presided as a former president of the church council.


He is survived by his wife, Alice of Eureka; one daughter, Lisa
(John) Albers of Minnetonka, MN; one son, Tim of Nashville, TN; two
brothers, Roger (Martie) Johnson of Encinitas, CA and Rodney
(Arlene) Johnson of Secor; one sister, Sharon (Jerry) Birkenbeil of
Chatsworth, IL; and two grandchildren, Jess and Alissa Albers.


Funeral services will be held at 11:00 am on Saturday November 23,
2013 at the Trinity Lutheran Church in Roanoke. Rev. Bruce
Scarbeary will officiate. Visitation will be held from 9:30-11:00
am on Saturday before the services at the church. Burial will be in
Secor Cemetery.


Memorial Contributions may be made to the Parkinson's Foundation
or Trinity Lutheran Church. Online condolences may be sent to the
family at www.knappjohnsonharris.com

To send flowers to the family or plant a tree in memory of Ronald D. Johnson, please visit our floral store.

To send flowers to the family in memory of Ronald D. Johnson, please visit our flower store.