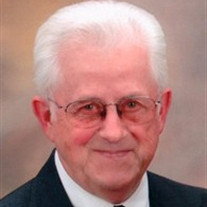 
Ron was born August 29, 1938, in Shelbyville, IL, the son of
Dean and Lavern Behnke.  He graduated from Roanoke High School
in 1956 where he met his future wife, Sharon Wessel.  They
were married on June 28, 1959, at St. Peters Lutheran Church in
Benson.


He is survived by his wife, Sharon of Roanoke; one daughter
Terri (Rod) Hostetler and one son, Troy (Jennifer) Behnke both of
Morton.  He adored his precious grandchildren, Kayli and
Karter Hostetler and Morgan and Madeline Behnke.  Also
surviving are two brothers, Robert (Karen) Behnke of Lakeview,
Arkansas and Elmer (Teri) Behnke of Decatur; and one sister Shirley
Bohlander of Roanoke.  He was preceded in death by his
parents, two brothers Kenneth Behnke and William Behnke, and two
sisters Martha Rinaldo and Joyce Behnke.


Ron served in the Army from 1960 to 1966.  He took his
basic training at Fort Leonard Wood, MO and then transferred to
Fort Knox, KY.  He was later one of eight local National Guard
members selected to train with Green Berets in one of the toughest
military schools in the world - the Army's Jungle Warfare Training
Center in the Panama Canal Zone.  He concluded his service
with the rank of staff sergeant.


Following his service, Ron worked at Metamora Woodworking as a
floor supervisor and packaging engineer.  He retired after 35
dedicated years.  In his retirement, Ron worked part-time at
Roanoke Motors and farmed the family land.  He was very
passionate of his farm work and very proud of his straight rows,
clean fields and mowed ditches.


Ron cherished spending time with his wife, family, and friends
traveling, camping, skiing, fishing, dancing and playing
cards.  He was an avid lifetime Cardinal fan and excited to
personally see the Cardinals win Game 7 of the 2011 World
Series.  Ron enjoyed watching his kids and grandkids through
many of their sports and activities while always giving
encouragement and advice along the way.  You could always find
Ron at the local restaurant having his early morning coffee with
the guys.  His love for singing always filled our homes and
touched the hearts of many.

He was a faithful member of Trinity Lutheran Church in Roanoke,
serving as a Trustee and a proud member of the Church Choir.
He was involved with Roanoke Jaycees and also an active member of
the Roanoke American Legion, serving as Sergeant At Arms
for over 10 years. Ron thoroughly enjoyed preparing his
famous French toast at the monthly community legion breakfast.


Ron was a loving, generous, and proud husband, dad, and
grandpa.  He will be greatly missed by us all, but remembered
in our hearts forever.  He fought a courageous battle and won
the ultimate prize.  Thanks to all who helped in his care.

Funeral services will be at 11 a.m. Saturday, April 12, 2014, at
Trinity Lutheran Church in Roanoke.  The Rev. Bruce Scarbeary
will officiate.  Visitation will be held from 4 to 7 p.m.
Friday at Knapp-Johnson-Harris Funeral Home in Roanoke and one hour
prior to the funeral services on Saturday at the church.
Burial, with full military rites accorded, will be in Roanoke
Township Cemetery.


Memorial contributions may be made to Roanoke American Legion or
Trinity Lutheran Church.  Online condolences may be sent to
the family at www.knappjohnsonharris.com.

To send flowers to the family or plant a tree in memory of Ronald E. Behnke, please visit our floral store.

To send flowers to the family in memory of Ronald E. Behnke, please visit our flower store.