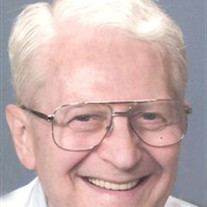 
He was born on September 22, 1932 in Peoria, IL to Herman and
Elsie Marchand Waldschmidt.


An Air Force Veteran, Ronald was a member of the Roanoke American
Legion Post 463.


Ronald was retired from Caterpillar. He had also served as a
policeman in the past and had worked security in the area.


Per his wishes, cremation rites will be accorded and a memorial
mass will be held at 10 am on Saturday, December 7, 2013 at St.
Joseph Catholic Church in Roanoke. Monsignor Charles Beebe will
officiate. Burial of ashes with military rites will be in Roanoke
Township Cemetery. Knapp-Johnson-Harris Funeral Home in Roanoke is
in charge of the arrangements.


Memorial contributions may be made to the St. Joseph Catholic
Church in Roanoke. Online condolences may be sent to the family at
www.knappjohnsonharris.com.

To send flowers to the family or plant a tree in memory of Ronald H. Waldschmidt, please visit our floral store.

To send flowers to the family in memory of Ronald H. Waldschmidt, please visit our flower store.