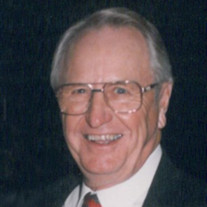 Roy was preceded in death by his
parents, one granddaughter, two brothers and three sisters.

He was a member of St. John's
Catholic Church, The Knights of Columbus and American Legion all of
Clinton.

He was an avid golfer and enjoyed
golfing at Clinton Country Club.  He was a St. Louis
Cardinal's fan and he enjoyed playing croquet with his
family.  In his younger years, he enjoyed
fishing.

He proudly served his country in
the United States Navy during WWII.  He was in farm sales for
many years with Lindsey Brothers Company where he was recognized
for his superior sales and service on many occasions.

His Memorial Mass will be held on
Wednesday, December 18, 2013 at 11 a.m. at St. John's Catholic
Church in Clinton with Rev. James P. Henning, OFM, Conv,
officiating. Visitation will be from 9:30 am until the service on
Wednesday at the church.  Military Funeral Honors will be
accorded.

Cremation rites have been
accorded.  Burial will be at a later date in Palmyra,
Missouri.

Memorials may be made to St. John's
Catholic Church in Clinton.  Kibler-Brady-Ruestman Memorial
Home in Bloomington is assisting the family with
arrangements.

To send flowers to the family or plant a tree in memory of Roy W. "Bubby" Riegel,, please visit our floral store.

To send flowers to the family in memory of Roy "Bubby" Riegel,, please visit our flower store.