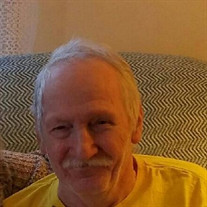 Roy was an Army Veteran and a member of Ironworker Local #112 for over 40 years. He traveled all over the country building great projects. He loved working on VW's and family members cars, fishing, and being with family.

Cremation rights have been accorded and a private family service will be held at a later date. Memorial contributions can be made to the family and online condolences can be left at lenzmemorialhome.com

To send flowers to the family or plant a tree in memory of Roy Hess, please visit our floral store.

To send flowers to the family in memory of Roy Hess, please visit our flower store.