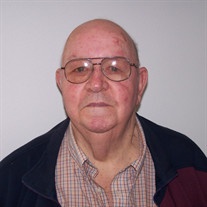 Rudolph C. Arnold, 80, of Lacon, died on June 12, 2018 at Heartland Healthcare in Henry. Born in Bradley Arkansas to the late Drew and Mary Dunn Arnold, he married Betty Wall August 15, 1958 in Marshall Texas. Betty passed away on February 14, 2005. Rudy served his country in the Navy on land and at sea on the USS Franklin D Roosevelt, returning to this area and spending 40 years working for Caterpillar in the old foundry and retiring from the Mossville hose plant. He belonged to the VFW and American Legion in Henry and the Masonic Lodge in Chillicothe.
Rudy is survived by his son James (Tracy) Arnold of East Peoria; daughter Janet (Gus) Melissinas of West Chicago; Sisters Lucille Young, Alma Woodruff, Peggy Gomez, & Virginia Arnold; brothers David & William Arnold; grandchildren Stephen Arnold, Rachel Arnold, Corey Starkovich, & Chad Burden; and great grandchildren Riley, Jaxson and Amelia. He was also preceded in death by four brothers.
Rudy enjoyed his retirement by watching Cardinal games along with spending time with his friends and family. He shared numerous lunch dates over the years with many friends and he is well known in the Red Lobster community.
He had a strong bond with his shipmates by staying in touch, visiting with and attending the FDR CVA-42 reunions in Florida, Kentucky, Illinois, and Virginia.
Cremation rights have been accorded and a memorial service will be held on Thursday, June 21 at 4 PM at Lenz Memorial Home in Lacon with Bob Murphy officiating. Visitation will be held two hours prior to the service. Burial will be in the Henry City cemetery at a later date. Memorials can be made to the Alzheimer's Association or Saint Jude and online condolences can be left at lenzmemorialhome.com


To send flowers to the family or plant a tree in memory of Rudolph "Rudy" Arnold, please visit our floral store.

Please click here to view the video tribute
To send flowers to the family in memory of Rudolph Arnold, please visit our flower store.