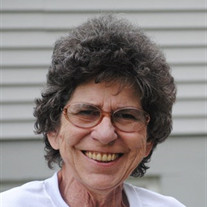 She is survived by one son, Albert B. (Angela) Holocker, Jr., of
Metamora; one step-daughter, Annette (Michael) Belcher, of
Chillicothe; three grandchildren, Rachel Holocker, and Brionna and
Arionna Belcher; three brothers, Gary (Jill) Anderson, of Lacon,
Don (Charlotte) Anderson, of Dacula, GA, and Carl (Kathy) Anderson,
of Brimfield; and several nieces and nephews.

Sally worked as a waitress at the former Cowell's Colonial Café,
the Club Lacon, Hunt's Drive-In, and Caterpillar, Inc. kitchen.

Sally enjoyed spending time with her family and friends,
especially her spoiled best buddy Lady (the one-eyed dog) and was
an avid Cardinal and NASCAR fan.

To send flowers to the family or plant a tree in memory of Sally Holocker, please visit our floral store.

To send flowers to the family in memory of Sally Holocker, please visit our flower store.