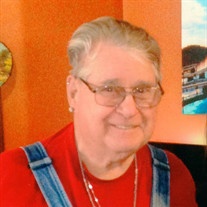 Sebert I. Donelson, 76, of Varna, died on February 14, 2018 at Heritage Manor in Chillicothe. Born in Lacon on May 29, 1941 to the late Inar and Dora Beam Donelson, he married Carol Myers on September 29, 1963 in Varna. Carol passed away on December 12, 2016.
Sebert served his country in the Marines from 1959 to 1963 and then became a pipefitter for 30 years at Caterpillar Tech Center retiring in 1993.
Sebert is survived by his daughter Zina (Scott) Sager of Magnolia; son Joshua (Connie) Donelson of Granville; grandchildren Kaylynn & Matthew Donelson both of Granville, Jason (Morgan) Dalrymple & Jesse Dalrymple both of Chillicothe and great grandchild Maggie. He was also preceeded by a brother and sister.
Visitation will be held at Lenz Memorial Home on Sunday, February 18 from 1 to 2 PM with a Legion service following. Cremation rights have been accorded and burial will be in Salem Cemetery number two in Varna at a later date. Memorial contributions can be made to Varna ambulance and online condolences can be left at lenzmemorialhome.com


To send flowers to the family or plant a tree in memory of Sebert I. Donelson, please visit our floral store.

To send flowers to the family in memory of Sebert Donelson, please visit our flower store.