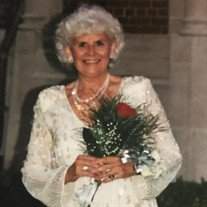 Shirley (Anderson) Kelly, 92, of Chicago, Ill., passed away Wednesday, June 3, 2020. Shirley was born on May 13, 1928, the daughter of Frank Anderson & Helen (Buckley) Anderson and grew up in Sparland. She attended Quincy College and later graduated from Columbia College in Chicago. Shirley married Parnell J. Kelly on August 20, 1949 and they lived in the northwest suburbs of Chicago. After raising their 9 children, Shirley became an actress and model, and was President of the Chicago Screen Actors Guild.

Shirley was preceded in death by a son, Joseph Kelly, a daughter Maureen McCambridge, and a grandson, Shawn Mast.

A graveside Catholic burial prayer service will be held at the Sparland Cemetery in Sparland at 11 a.m., Saturday June 13, 2020, with inurnment next to her mother. A celebration of Shirley's life will be held later this summer.

To send flowers to the family or plant a tree in memory of Shirley (Anderson) Kelly, please visit our floral store.

To send flowers to the family in memory of Shirley Kelly, please visit our flower store.