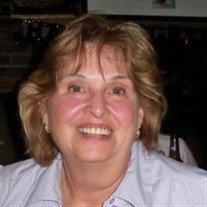 Shirley L (Sims) Simmons, 77, of Bellevue, passed away at Proctor Hospital on November 26, 2020. Shirley was born on July 23, 1943 in Peoria to the late Stanley and Rowena (Clark) Highley. She married William Simmons on November 8, 1968 in Eureka. Bill preceded her in death on March 17, 2019. She was also preceded in death by nephews Brandon Edenburn, Todd Brooks, and Todd's wife Charlotte.
She is survived by her daughter, Tina (Fred) Fleming of; Lowpoint; grandson Wyatt (Aimee Mooberry) Martin of Germantown Hills; sisters Donna (Carl) Jenkins of Memphis TN, Tabitha (Linda Whitehead) Sims of Peoria Ester Lay of California Janella Sims of East Peoria; Nieces Tina (Terry) Rabenau of Peoria, Debbie (Greg) Sherlock of Bellvue Jenny (Chris) Tullos of Burilson TN, Michelle (Larry) Spitler of Mumford TN; nephew Andy (Monica) Simmons of Stonefort; many great nieces, great nephews, family, and friends who loved her very much.
Shirley went to Manual High School in Peoria. She worked at a few different professions, retiring as a dental assistant; what they all had in common was taking care of others. Shirley was such a force and touched so many people. After they retired, Shirley and Bill moved to Radom, IL. Shirley could never sit still and became involved at St. Michael's church where she made dear friends and fell in love with quilting. We will all cherish the love she put into each custom-made quilt. She was the glue that held her family together and there was nothing that made her happier than taking care of her family and friends. She was one of a kind and dearly loved by so many who will miss her greatly.
Cremation rites have been accorded and services will be held at a later date. In lieu of flowers; donations in Shirley's memory may be made to St. Jude Children's Hospital. Online condolences can be left at lenzmemorialhome.com

To send flowers to the family or plant a tree in memory of Shirley L. Simmons, please visit our floral store.

To send flowers to the family in memory of Shirley Simmons, please visit our flower store.