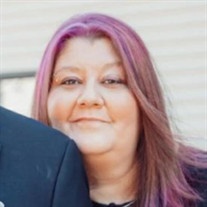 Tara Marie Presley, 47, of Princeton, formerly Lacon, died on February 24, 2021 at OSF Saint Francis Medical Center in Peoria. Born in West Islip, New York on August 7, 1973 to Glyn and Rose (Gama) Schol, she was a bus monitor for the Chillicothe school district for over five years.
Tara is survived by her mother Rose of Chillicothe; son Brandon (Becca) Crew of Lacon; daughters Marley (Nick) Griffin of Henry, Ashley and Amber Malone of Putnam; fiancé William Malone of Putnam; brothers Richard (Jessica) Schol of Chillicothe, Tony (Ashlie) Schol of Chillicothe; five grandchildren;and many nieces and nephews. She was preceded in death by her father Glyn Schol, brother Glyn Richard Schol, and ex-husband Terry Presley.
A visitation for Tara will be held Tuesday, March 2 from 5 to 7 PM at Weber Hurd funeral home in Chillicothe. Cremation rites then will be accorded and a private family burial will be held at a later date. Memorial contributions can be made to her gofundme and online condolences can be left at lenzmemorialhome.com


To send flowers to the family or plant a tree in memory of Tara Marie Presley, please visit our floral store.

Please click here to view the video tribute
To send flowers to the family in memory of Tara Presley, please visit our flower store.