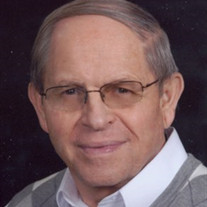 Terry Joe Romack,
Bloomington, passed away Thursday, September 19, 2013 at 2:09 p.m.
at his home after a brave battle with cancer.

Funeral services will be held at
11:00 a.m. on Monday, September, 23, 2013 at Calvary United
Methodist Church in Normal with Rev. Randy Perry officiating.
Visitation will be at 4-7:00 p.m. on Sunday, September 22, 2013 and
one hour prior to the service on Monday at the church. Burial will
be in Green Hill Cemetery, in rural San Jose, IL.
Kibler-Brady-Ruestman Memorial Home in Bloomington is assisting the
family with arrangements.

Memorials may be made to Calvary
United Methodist Church and to the Community Cancer Center.

Survivors include two sons:
Timothy J. Romack, Greenville, NC; Thomas J. Romack, Mapleton, MO
and one precious granddaughter, Danielle Romack of Greenville,
NC.   In addition, he is survived by 11 nieces and one
nephew. He was preceded in death by his parents and one sister,
Elsie Romack Hooker.

Terry graduated from Newton High
School in 1957, joined the Army Reserves, and graduated from the
University of Illinois in 1962 with a degree in Accounting.
While at the U of I he was a member and president of Alpha Chi Rho
fraternity and a member of scholastic honor societies Phi Eta Sigma
and Star and Skull.  He was a tenor in the U of I Varsity
Men's Glee Club 1960-62, participating in the1961 European
Tour.  At the University of Illinois Terry earned his pilot's
license and enjoyed flying.

Terry was a self-employed
accountant in Bloomington, owner of Mid-State Accounting Service,
for 40 years.  He was an enrolled agent with the Internal
Revenue Service.

He was a 45-year member of the
Young Men's Club and 43-year member of Calvary United Methodist
Church where he was a choir member for 25 years and served on the
finance committee for many years.

His interests included antique
cars, Corvettes, photography, farming, hunting, fishing, rose
gardening, Boy Scouts and singing.  His favorite sports teams
were the Cubs and the U of I teams.  His conscientious
Christian faith, honesty and morality guided his decisions and
behavior.

Terry will be remembered for his
quiet manner, sweet tenor voice, quick wit, deep intelligence,
compassion for others and faithfulness to his family, friends and
church.

Terry's family wishes to thank the
many skilled and compassionate doctors and nurses for the care they
provided.

To send flowers to the family or plant a tree in memory of Terry J. Romack, please visit our floral store.

To send flowers to the family in memory of Terry J. Romack, please visit our flower store.