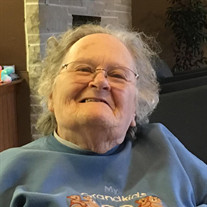 Thelma D. LaKemper, 87, of Lacon, formerly Varna, died on August 14, 2017 at St. Joseph's Nursing Home in Lacon. Born in rural Sparland on December 16, 1929 to the late John and Luella Rickey Copple, she married Clarence Bruell and had three sons. Later she married Bill LaKemper on February 20, 1960 in Henry. Together they raised her three boys, his two daughters, and their son into a family.

Thelma worked many jobs over the years from taking in laundry and housekeeping to being janitor and school bus driver for the Toluca school district for over 15 years. She loved playing bingo, dominoes, and cards.

She was preceded in death by three grandchildren: Brooke Bruell, Derek Hussemann, and Steven Howard.

A funeral service will be held Saturday August 19th at 11 AM at Lenz Memorial Home in Lacon with visitation one hour prior to service. Burial will be in Saint Anne's Cemetery in Toluca. Memorials can be made to Saint Joseph's Nursing Home Activity Fund and online condolences can be left at lenzmemorialhome.com


To send flowers to the family or plant a tree in memory of Thelma D. LaKemper, please visit our floral store.

Please click here to view the video tribute
To send flowers to the family in memory of Thelma LaKemper, please visit our flower store.